Diane Yashim the former housemate of BBNaija 2019, three months after the TV reality show has featured music star, Iyanya in her debut drama entitled ‘The Therapist’.

Base on her recent debut drama entitled ‘The Therapist’, the former Big brother Naija 2019 housemate, Diane has stirred reactions in the social media platforms.

Diane in a short video posted on her Instagram page was spotted kissing popular musician, Iyanya. 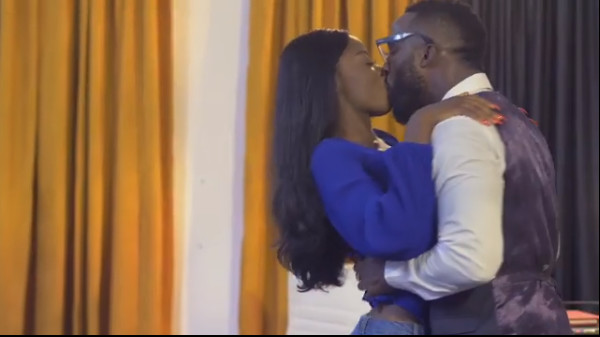 Alongside her video, she wrote: ” The best thing that could happen to you is falling in love. When that rare moment happens, hold it tight, cherish it and live in the moment. Love and let be.”

Her action came as a surprise to fans and Nigerians on social media.

Diane while in BBNaija house was a reserved and homely lady.

@Harry_obi “Chai! Iyanya just came from nowhere to be kissing Diane sha. Babe wey men don dey program for months. Everything is not muscle. He should sha not come to the mainland.”

@Joemoe31 ” Ahn ahn Diane you did that, you are a focused girl.”

@Usmanashafe ” Hello everybody, I just watched a video of my Diane now french kissing Iyanya. Does anybody care to tell me what is going on?

@Ochogotmoves “Diane turns to Iyanya and took the gist from the garden to the bedroom. I fear who no fear this girl.”

@Ck_cjukz “Iyanya just from nowhere come kiss Diane. Babe I don dey crush on since when. And she no see Okon Lagos go kiss like that, na that bad boy, the baddest, Iyanya.”

@Comfort4bvm “Iyanya am happy seeing you working with Diane. But you took that kiss too far in Iyanya style oh.”